Ice sheets and their impact on the landscape What happens to the land when a glacier slides over it? A series of short Vimeo tutorials from the Geographical Association about drumlins, ribbed moraine and other landforms that result from the effects of the Pleistocene ice sheets that once covered Ireland (and elsewhere). They are presented by Chris Clark, Professor of Palaeoglaciology at the University of Sheffield. His research interest is glacial geomorphology which he discusses in this series of videos. The videos are pitched at secondary school level and so are not too technical to understand. 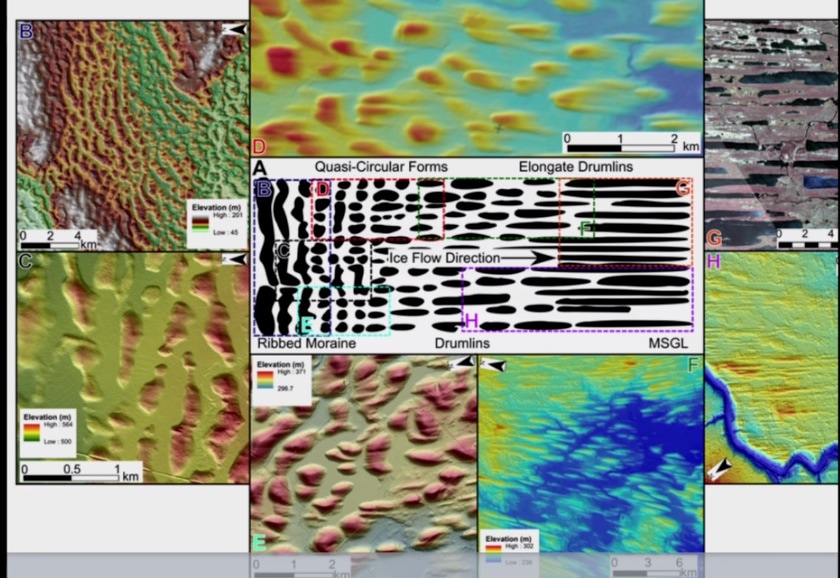 Illustrating the possible relationship between the different landforms.

Subglacial bedform is a generic term for the range of longitudinal and transverse landforms produced at the base of a glacier or ice sheet as a result of active ice flow across a sediment base. Whilst individual types of subglacial landforms have often been investigated in isolation, there has been an increasing realisation that they all belong to a single family of related landforms, best thought of as a continuum of subglacial bedforms (Rose, 1987). This view uses the concept of a single set of processes that may lead to a wide range of landform shapes and characteristics, only some of which conform to our `classical text book´ landform types such as the DRUMLIN. As with aeolian and fluvial bedforms we would expect a combination of distinctive landforms and a range of intermediate morphologies. Specific landform types that are part of the subglacial bedform system are: FLUTES, DRUMLINS and MEGA-SCALE GLACIAL LINEATIONS, which are all longitudinally streamlined landforms at different scales from metres to tens of kilometres, and are commonly referred to as glacial lineations. ROGEN or RIBBED MORAINE are also subglacial bedforms but are sculptured ridges formed transverse to the ice flow direction. A strong characteristic of all subglacial bedforms are that that they occur in discrete and fairly well defined fields or swarms comprising hundreds to thousands of individuals, and that different types such as drumlins and Rogen moraine are often found in close association with each other. An alternative school of thought considers that subglacial bedforms arise from large subglacial flood events, with water rather than ice being the shaping media. (See Drumlin page link below for further details).
Reading Benn, D.I., and Evans, D.J.A., 1998: Glaciers and Glaciation. London: Arnold.
Rose, J. 1987. Drumlins as part of a glacier bedform continuum. In Menzies, J. and Rose, J. (eds), Drumlin Symposium. Rotterdam, Balkema, 103-116.
Link to Sheffield University Drumlins page -  https://www.sheffield.ac.uk/drumlins/index