"Who does not wish on a fine day to escape from the town to the country? And when you get there, it adds enormously to your interest and enjoyment if you understand something about the architecture of the hills and plains."
from The Way That I Went by Robert Lloyd Praeger, 1865 to 1953. 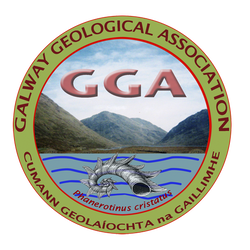 ﻿
The Galway Geological Association  was formed in October 2011 and grew out of the Diploma courses in geology and gemmology run by the National University of Ireland, Galway (NUIG). These courses, both of two years duration, were started in 2004 and are on-going. It was felt by many of the course graduates that there was a need for an organization to promote the diversity of highly interesting and readily accessible geological sites to be found in the West of Ireland.

The GGA is one of the most active amateur earth science associations in Ireland and can now boast an active and growing membership with more than 40 individual and family members. We are open to anyone with an interest in the enjoyment and stimulation that can be derived from a day  outdoors when it is informed by a basic knowledge of geology and the processes that built the landscape. Galway, and the wider Connaught area, boasts some of the most spectacular and interesting countryside to be found in Ireland.

With this in mind, the GGA organizes frequent field trips to explore the area, usually with expert guidance. We also have a program of evening lectures during the year to learn more about this fascinating and important subject, with guest speakers from Academia and Industry. We are in the fortunate position of being made extremely welcome by the Department of Earth and Ocean Science, NUIG, who allow us the use of their facilities for meetings and lectures.

An historical view of the geology of Galway.

"In a geological point of view the county may be considered as divided into two great regions, the limestone and the granite: the high road from Galway to Oughterard nearly marks the division, which is also discernible to the eye of an intelligent observer by the decline of the verdant hue that enlivens the former. The country north and east of this boundary line is limestone; that to the south and west, with a few minor exceptions, is granite.
The Slievebaughta mountains are silicious; the great group of Benabola chiefly quartz: Poulacopple mountain is hornblende. Between Ballynakill bay and Ardbear is a tract of mica slate and quartz interspersed with veins of primitive limestone. The same formation runs through the hills to Oughterard; it contains very beautiful serpentine and verd antique. The largest deposit of it is in the centre of the Benabola group, where it is nearly unattainable in consequence of the difficulty of conveyance; but the most valuable quarries are at Bawnanoran and Lissouter, near the head of Birtirbuy, whence the splendid chimney-piece presented to George IV., and now in the Carlton Club House, was taken. A quarry at Letterlough contains a marble of a deep green porphyritic substance, unique in character and appearance.
Lead ore has been found in many places, nodules of which of very pure quality are frequently met with in the mountain streams, and along the sea shore. Iron ore was extensively worked, while timber was plentiful for smelting it. At a quarry at Dunmore, millstones are made, said to be superior to those of France. A crystalline sand, of very superior quality for scythe boards, occurs at Lough Coutra, for which mowers come from twenty miles' distance. Manganese has been found in Slieve-an-oir, near the border of Clare.
The limestone, except that of Connemara, contains fossil remains in various quantities, from that of Oughterard, disfigured by sections of large shells, to the beautiful marbles of Angliham, Menlo, Renville, and Merlin Park, near Galway, which are of a fine black, nearly pure, and highly prized in England and in Dublin. At Ballyleigh, near Gort, a fine black marble has long been used; some of superior quality is found near Athenry; and a very beautiful grey marble has been discovered at Woodbrook. Near Ardfry, and in Mr. D'Arcy's demesne, in Connemara, large beds of oyster shells may be seen many feet above high water mark."

To keep informed about the GGA activities please bookmark our web-site. If you have any questions, or you wish to enquire about membership, you can contact us using the links on our contact page.