Connemara marble is the standout Irish geological and gem material, and is therefore recognised as the iconic stone of Ireland. Its use in jewellery can be regarded as one of Ireland’s indigenous industries, and the quarrying of Connemara marble is a centuries-old endeavour. The stone exhibits intricate millimetre- to metre-scale corrugated layers that range from white through sepias to various shades of green. The polished stone’s appeal was described by American art critic Charles Caffin as ‘the exquisite mystery of graded greens and greys and black, their tempestuous streakings and tender veining, and the perfect texture of their polished surface’.
The colour variations displayed by Connemara marble derive from the relative abundance of the coloured silicate minerals present (e.g. deep green hues appear when serpentine predominates). By contrast, white- to-grey marble such as that quarried at Carrera, Italy, consists of relatively pure metamorphosed calcite- and/or dolomite-bearing limestone. Max noted that only a small portion of the Connemara marble horizons contain sufficient proportions of carbonate minerals to be properly termed ‘marble’, and furthermore it is the other minerals (i.e. mainly calc-silicates and serpentine) that impart the colour varieties so typical of the stone traded as Connemara marble.
Despite a number of reports on the mineralogy of Connemara marble, descriptions of the relationship between the mineralogy and colour variations are absent from the literature. We present new mineral distribution maps and mineral abundance statistical data (expressed as area percent) from six polished thin sections of Connemara marble, using a novel analytical technique called mineral liberation analysis–scanning electron microscopy (MLA-SEM). The mineral distribution maps highlight the correlations between mineralogical composition and the layered, polychromatic characteristics of the marble. In addition, a triangular discriminant plot of the quantitative mineral abundance data indicates that the marble samples display a petrological continuum from calc-silicate to metacarbonate rock. The mixture of these components in the rock results in mineralogical and textural variations that impart the interesting ornamental characteristics to this gem material.
GEOLOGICAL SETTING
The Connemara region of western Ireland (Figure 2) is composed of a number of major rock units. The central zone comprises the Connemara Metamorphic Complex (CMC) containing Dalradian metasediments (ca. 650 million years old [Ma]) and a 475–463 Ma metagabbro-gneiss suite. The intrusion of the Oughterard granite, east of Maam Cross, occurred during the end stage of the Grampian orogeny (ca. 475–462 Ma). The CMC is bounded to the north by Silurian and Ordovician sedimentary and volcanic rocks, and to the east it is in faulted contact with Carboniferous limestones. To the south lie the younger Caledonian Galway granites (~425–380 Ma). Some exposures of Ordovician sedimentary and volcanic rocks occur just south of Clifden and further south on the islands of South Connemara. 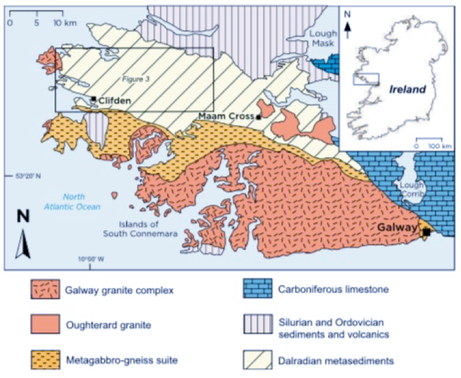